I’m a little shocked January is already over, a lot has happened to me in this month it has been crazy but I’m still feeling positive and excited for 2019. I’ve submitted some pieces of work and I’m currently thinking through an idea I have for a competition that closes end of February, and I’ve been trying to apply for some creative jobs or scouting out opportunities even if they aren’t advertising.

I feel like I’m doing okay. I had a mental health blip recently, the reasons of which I will not discuss at this time. But that’s all over now; it was a sign from the universe that this is not the place for me and I have bigger and better things to get on with. It was taking all my energy and thoughts, now I’m back to full focus on my health, my work, and myself and I feel much better about that. I have some money saved and I still make a little from depop sales so I think I can still do the enjoyable experiences I want to do this year.

LA was a pretty crazy ride. I honestly can’t even remember the order things happened because we just did so much every day. The main thing for me was it felt familiar, even though I didn’t know where anything was etc. it felt like I’d been there before. I felt comfortable ordering drinks or food at places, I kept forgetting about the whole tax deal, but everyone in the service industry was super nice and accommodating where they could be.

Unfortunately, as a group we often went to food places that didn’t have much to offer me. Everyone was surprised, but I had said from the beginning LA has more specialised

restaurants than the UK, but the usual places still barely accommodate. It just sucked we didn’t go somewhere I could choose from a menu, not from eating or starving. If I ever go back, I’ll definitely be doing more research on food places I can eat at.

I do have to say one thing, I hated the coach and felt sick most of the time, but American billboard advertisements are… hilarious? Very extra, very misleading, and it was weird seeing the bench adverts in person too. There was one billboard that said ‘are you big enough’ with a woman in a pantsuit with her arms crossed next to it. I think it was a legal firm… 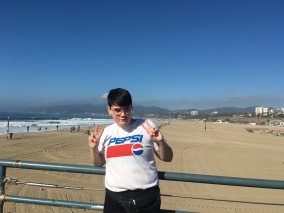 So many chances to re-enact vines when you drive around LA. The two best moments were ‘road work ahead’ and ‘freshavacado’.

We saw really iconic places. We were staying in Studio City, we went to Santa Monica beach and the pier, Venice beach, the Griffith Observatory and saw the Hollywood sign from there. We went to Universal and did the studio tour and saw a bunch of new and old sets, EVEN THE GOOD PLACE! Saw the Harry Potter section of Universal. It’s so realistic and I want to be part of the Toad Choir that performed!

We went to the Hollywood Walk of Fame and saw tonnes of stars names, also lots of rappers trying to sell their demos. We went to this Cemetery (I don’t remember the

name) where lots of famous people are buried such as Johnny Ramone of the Ramones and Judy Garland. We went into this really cool mausoleum with these huge crazy Greek statues and marble floors and walls.

We went to the oldest McDonalds, which really didn’t bother me I couldn’t order anything to eat as per this trip so I wandered about.

And we went to Disney which is not accessible really at all unless you have an electronic wheelchair and even then the girl on our trip who had and used one, it died part way through the day and she needed to borrow a manual one and needed someone to then push he around. It’s also completely appalling in the food department. Single options, lots include cheese, and their fries (which come with Vegan meals btw) are fried with the meat. I paid over $22 dollars for a single burger that wasn’t even good.

I liked when we first got there and walked round for a little tour with all these cool historic facts about the place and a couple of rides but yanno, your disabled pal is really just not made for theme parks, also I just don’t think I like them? I think that I think I like them because everyone really aggressively likes them…

I kinda just wanted to have more of a chilled day… I would have liked to be somewhere on a warm day where I could slowly wander round, sit at a café, yanno things normal

people do when they’re on holiday. It just felt a bit too packed for me. Plus, there was a promise of seeing the Charmed house but that fell through so I’ll have to go back for that.

I fell in love with it really. The supermarkets had more options, the weather wasn’t as cold, people seemed nicer?? We discussed this. The stereotype is British people are awkward and polite, which as an over all is not true at all. And the stereotype of Americans is loud, obnoxious, annoying, which isn’t true when you’re in America. However, I will say I think its true when Americans come to the UK. The American payment system is fucked up and shitty and I feel like that’s the only thing Britain has done right besides free health care. And right by the Santa Monica Pier there’s practically a village of homeless people; I saw so many homeless people whilst I was in LA and it was really shitty. We have tonnes over here too but Police often force them more out of site in a lot of places. LA they were out where you could see them, you could see how bad the problem is. I’m not saying what we do in the UK is good, not at all, we shouldn’t be scurrying homeless people out of site we should be giving them shelter yanno? Plus they have weed stores I could buy from to help my chronic pain!

Besides the negative points, I really liked it there and feel like there’s so much more to see and I’d really like to stay there long term sometime. I might wait until Trump’s reign is over… but being there felt normal.

I get vibes in different places I go, but this one felt similar to living at home or in London. Maybe one day you’ll see me there.

As you know from my last blog post, I’ve been struggling with a lot of health problems stemmed from this trip. I’m nearly all better, still some weird aches and pains but I’m seeing a chiropractor and a massage therapist to try and alleviate the pain and get me back on track. I’m going back to my weekly exercise class and I tried doing some weight training again. I spent a lot of time sleeping through the day and watching Netflix constantly but I think I needed it for my body to heal. I’ve had a lot of crazy dreams too, maybe I’ll let you all in on them sometime.