This lovely girl, Cecile, gave me so much information about local and UK taxidermy before she goes to France to become part of the scene there because I’m kind of interested in it and possibly buying some pieces (mainly bones for me) and want to buy from decent places and I know there are likely tonnes of blogs full of this content, but my blog tends to be what I’m interested in as and when I am interested in it! So, this week it’s taxidermy! Hope you enjoy! 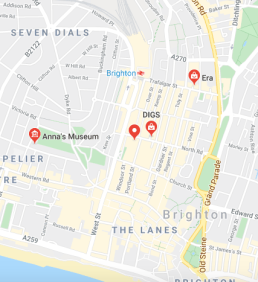 For those local to Brighton, there’s a great place next to the post office on North Road called DIGS and this is where Cecile was learning how to do taxidermy. Run by a woman called Victoria and her products are very high quality so high price.

Around the corner in the North Laines, there is a Bazaar where Cecile got most of her stuff. The Snoopers Attic can be good, she said, but the flea market can be more hit or miss in Kemptown. Sometimes they price items like new ones but the ears are worn out or teeth broken, so keep an eye at any market.

Online UK shops can be quite easily found via instagram and tend to sell through Etsy.

The Maiden Mother & Crone Interiors is the most known in the UK and have some very interesting pieces turning taxidermy in to art pieces. This is her personal account with pieces on too.

Made From The Dead taxidermy by Tonja Grung is another popular one. Her instagram says wet specamines but I saw a lot of lizards, birds and butterflies.

You can browse these two shops’ followings for more creators and stores, the taxidermy world is quite small apparently. You can follow hashtags like #taxidermy #oddities #vultureculture and #diaphonisation (which is a new and very interesting technique) and it you’re into formol and jars there is #wetspecimen

If you end up shopping abroad, you’ll end up paying a fortune on shipping, permits and notifications of transport. There are different rules in different countries about what Taxidermy is allowed.

Headsnbones has a lot of great stuff.

Osteal Jewellery have a lot of bone taxidermy but also jewellery which is pretty cool.

And finally, the Mandible Menagerie.

There’s also a Facebook group called ‘Skull Collecting’ that people can join for more of a community learning and making friends.

Cecile gave me all this information, so now I know where to go locally and within the UK generally too for everything I need and want! She is now moving (if not already moved) to France and is determined to be a taxidermy ambassador as there is only 70 people licensed to do taxidermy all over the country and she hopes to help get the numbers up.

The most important thing for me was ethical businesses and she says most of the people listed use ethically sourced materials (because they have to, to run a business) and for more exotic specimens you have to have the certificate of origin!

This might seem a bit odd that I, a vegetarian, is interested in taxidermy, but I like the idea that the bodies of animals become a new form of art and have a new lease of life being decoration or jewellery after their life has departed. Taxidermy is not meant to be from hunted animals, and I am entirely against hunting.

I hope this was fun and a bit different for all!

One thought on “Taxidermy: Tips For Newbie UK Buyers”